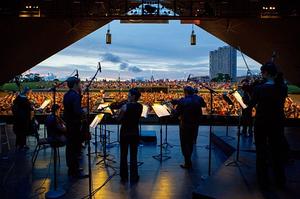 Houston's Mercury orchestra is in a festive mood these days.

As artistic director Antoine Plante explains, the origins of Houston's period orchestra can be traced back further than the past 15 years.

"In the 1960s, my mother and father ran an early-music ensemble," recalls the conductor, speaking from his hometown of Montreal. "They were part of the generation that rediscovered medieval, renaissance and baroque music. My parents wanted to make this music accessible to as many people as possible. This idea influenced Mercury."

Plante, 40, first came to Houston to study music at Rice University. He soon noticed the city had no so-called period orchestra playing baroque music on the original instruments of the era.

"With friends from Rice," he says, "I started putting concerts together, with the intention of providing a period orchestra. From the beginning, the idea was to do something big, and also meaningful for the community. I started training musicians in the styles and the instruments of baroque music."

When: 8 p.m. Thursday and Saturday

Taking the name "Mercury" from the Roman god who invented the lyre, Mercury Baroque, as the ensemble was known for many years, was launched in 2000. Today, the orchestra presents about 50 concerts per season and has an annual budget of about $1.5 million.

Looking back on the past decade-and-a-half, what stands out most in Plante's memory are the operas his ensemble has presented - especially "Armide," by Jean-Baptiste Lully, in 2009. The production, staged by French director Pascal Rambert at the Wortham Theater Center, was starkly modern in its visual elements yet meticulously historical in its musical style.

Three years ago, Mercury changed its name, dropping the word "baroque" and adding the tag-line "the orchestra redefined."

"We started performing music outside the baroque era," Plante says. "We wanted to perform Beethoven, Mozart and Schubert."

The orchestra's forward march through time continues in the 2015-16 season, with works by Antonín Dvorák and Jean Sibelius, two romantic-era composers separated by more than a century from the baroque period. Plante says he applies the same standards of historical accuracy to the romantics as he does to baroque composers.

Paul Kittelson's sculpture "Falling Skies" is on view at Devin Borden Gallery through Feb. 22. Kittelson's rakish wit rises from 'Fallen Skies' "Feline Shrine" is among works on view in "Ann Harithas: The Domain of Images" at Houston Baptist University's Contemporary Gallery through March 4. Art exhibits in Houston this week The all-male British company BalletBoyz will perform Christoper Wheeldon's "Mesmerics." BalletBoyz dancer likes the heavy lifting A painting based on Mr. Peanut, by Clark Fox, above, and works by Ron English subvert iconic marketing imagery. Eugenio Merino's "Always" sculptures, left, feature a rogue's gallery of world leaders. Exhibit of works by activist artists is subversive, thoughtful, Slavs and Tatars' "Alphabet Abdal" conveys a Christian message in Arabic text, which is also the sacred language of Islam. "Men are from Murmansk. Women are from Vilnius"
"For the different periods," he says, "our wind players use different instruments to re-create the right pitch. And the string players change their bows."

Plante goes on to explain Mercury's name-change also came with a new strategy for accessibility, bringing his orchestra to venues throughout the Houston area. Now, Mercury has a downtown series at the Wortham Theater Center, and also a neighborhood series in four locations: Memorial Drive Presbyterian Church; the Museum of Fine Arts, Houston; Dosey Doe in The Woodlands and a to-be-announced location in the Heights.

As well, Mercury presents concerts at the Methodist Hospital, University of Houston Clear Lake, Lee College in Baytown and in schools around the city.

"Our education programs are very important to us," he explains. "We don't just teach baroque music - we teach music."

To celebrate Mercury's 15th season, Plante has put together an ambitious season. He points to several concerts that stand out as special.

On Sept. 19, mezzo-soprano Susan Graham joins Mercury for an evening of vocal music by Henry Purcell and Wolfgang Amadeus Mozart.

And Mercury will end the 2015-16 season on May 14 with Ludwig van Beethoven's "Symphony No. 9." The required orchestra and chorus will make this the largest concert Mercury has ever mounted.

It all begins with a bang, with Handel's "Royal Fireworks Music." The fireworks, by Sky Wonder Pyrotechnics, will be presented on Saturday only.

"This is celebratory music," Plante says. "It's Handel's largest instrumental piece, and it was written to celebrate a military victory. It's going to be a really exciting show, and fireworks will be paced with the music on stage."